Network Innovations (NI) is thrilled to continue supporting John Peck, Adventure Coach and Founder of Executive Stretch, as he embarks on global expeditions.

As you might know, Network Innovations has supported John Peck for over 4 years as he's embarked on expeditions to some of the most remote corners of the world. Reassured by the reliability and stability of his satellite phone, John continues to roam the globe and uses his skills as an adventure coach to immerse others in his world of adventure.

In this blog, we've got a story too good not to share. In John's own words, read about his most recent challenge - taking on the Namib Desert and climbing the aptly named 'Big Daddy' sand dune! 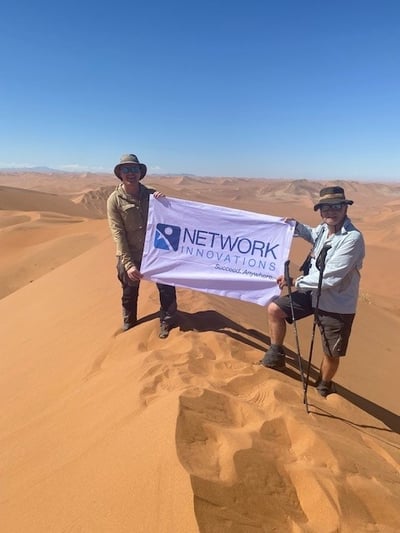 The Naukluft Trail has been described as the toughest trek in southern Africa. It lives up to its reputation.

Long days, heavy loads, uncertain water supplies, and steep descents into deep gorges. Constantly aware of the challenges of being bitten by deadly snakes and scorpions and the ever-present fear of dehydration.

I have led teams on this route half a dozen times and still find it stunningly beautiful and incredibly remote. This year, we decided to follow the Naukluft Trail challenge with an immediate ascent of the biggest sand dune in the world - The Big Daddy sand dune.

It was a challenge that I took lightly - perhaps too lightly - having succeeded in completing the Marathon Des Sables few years ago where we spent seven days in the Sahara Desert, toiling up and down sand dunes and running along remote shale tracks. It looked tantalizing easy from down below.

However, I had seriously underestimated this challenge! The epic Naukluft challenge - ending the previous day before this sand dune ascent - had taken its toll on depleting my energy reserves. I’d also forgotten that I’m now nearly 77 years old and struggling up steep sand is a lot harder than I remembered from those Sahara days.

Fortunately, we had a great team and together we made it to the summit with the most stunning views imaginable.

What a joy it was to be able to pick up my satellite phone, sponsored by Network Innovations, to ring my family and tell them that we had hit our target destination. Thanks again to you guys for your support that allows us to take on severe challenges in remote areas - knowing that we are just a phone call away from help in the event of trouble.

It's World Space Week. An annual event that celebrates technology and science, alongside the...