The Agoria Solar Team is composed of Belgian engineering students, that are competing to build the most innovative and efficient solar car. Since 2006, the team has embarked on races across the world, showcasing the power of green energy and proving that their technologies are at the forefront of innovation.

Nine solar cars later, the Agoria Solar Team was ready for their next journey – Solar Challenge Morocco. Navigating the Moroccan Sahara and facing the challenges that come with its terrain wasn’t going to be an easy task. After months of designing and building, in July 2021, the team unveiled their new solar vehicle, BluePoint Atlas. This car would take them on a 2,500-kilometer drive along the foothills of the Atlas Mountains, going head-to-head with other student teams from around the world.

The distance and terrain they faced in Morocco wasn’t their only challenge. The Agoria Solar Team would be travelling through remote regions, leaving the team without access to the internet or terrestrial communications. It was critical that they could discuss their strategy throughout the race with their support team vehicles, and constantly monitor conditions to avoid being caught by surprise with unpredictable weather. The Agoria Solar Team needed a solution that could move with them, ensuring reliable connectivity and safe travel.

In 2019, the Agoria Solar Team took home the world champion title in Australia after coming first place in the Bridgestone World Solar Challenge. Throughout that race, they partnered with Network Innovations and Iridium®, who ensured the team could communicate via satellite – seamlessly. 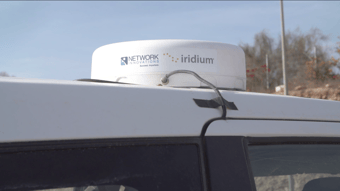 Following that successful venture, Network Innovations, alongside partner Iridium®, once again became official sponsors in 2021, supporting the teams’ latest challenge in Morocco. To ensure the success of the team, three Thales MissionLINK terminals utilizing the Iridium® Certus network were mounted to the crew vehicles in convoy with BluePoint Atlas. In addition, five satellite phones were supplied, providing both voice communications and data transfer capabilities for the Agoria Solar Team not only throughout the race, but also during testing.

Frederik Vanmaele, Race Strategist, commented:
“Before and during the Solar Challenge Morocco, we could make use of the technology of our partners, Network Innovations and Iridium®, to assure communication and data transfer between different cars in the convoy. Throughout the race, on different occasions, this technology proved to be crucial for us to be competitive.”

In October 2021, after months of preparation, the Agoria Solar Team made a strong start in the Solar Challenge Morocco. Over the five days, they overcame the challenges of tough terrain, a flat tire, and hectic traffic, while still maintaining a leading place. During the race, their chase vehicle gathered data, which ensured the team and their crew could determine an optimal strategy at every crucial moment. Checking weather and traffic information on the move was made possible with the reliable internet connection provided by the MissionLINK terminals. This helped the Agoria Solar Team make a strategic decision to accelerate their speed on day one to stay ahead of the clouds.

"It may seem like quite an extreme solution to turn to satellite, but it turned out to be very simple with the help of Network Innovations and Iridium®."
–Frederik Vanmaele, Race Strategist in The Agoria Solar Team

When the final times were tallied, The Agoria Solar Team came in second place – only 49 minutes behind Solar Team Twente. A major achievement considering the obstacles faced.

Network Innovations and Iridium® provided an all encompassing satellite solution that ensured remote communication, internet connectivity, data transfer, and asset tracking. The Agoria Solar Team was able to connect with each other, their equipment, and their support teams throughout the fast-paced movements through the Moroccan Sahara.

“It is clear to us that without the help of our partners, Network Innovations and Iridium®, the race would have been much more of a challenge to finish. Therefore, we want to thank them for their elaborate help and hope to be able to count on their support in the upcoming years and races.” - Frederik Vanmaele

Network Innovations and Iridium® look forward to a continued partnership with the Agoria Solar Team, ensuring their operations in the future can run seamlessly and lead them to Succeed. Anywhere.

At every RedBull MotoGP Rookies Cup race, the young racers are thrilling fans as they navigate...

Network Innovations (NI) is thrilled to be sponsoring the Agoria Solar Team, a team of 20 Belgian...