Matt George, our Vice President of Global Maritime Sales, and keen outdoorsman tells all about his first experience working on board a sport fishing boat - going on to catch a 400 lb blue marlin. 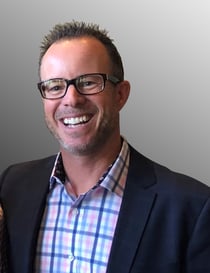 Great technology is nothing without great people. Here at Network Innovations, we’re continuously inspired by our clients, their work, and their experiences – and also by our own teammates. Our employees across the globe have fascinating stories to share, and it’s these experiences that fuel innovation.

In this blog, we hear from our Vice President of Global Maritime Sales, Matt George, whose excitement for life on the water never fails to spark conversation! Matt’s experiences at sea have given him a deep understanding of the lives his customers lead, their pain points, and which solution would best enable them to achieve their goals.

I’ve always been passionate about any type of fishing. From my early days fishing in streams and mud puddles to being out in the ocean angling for anything that swims. I’ve been fascinated by it from a young age, and today, share the same appetite for the sport as many of my clients.

So, when I started working as a mate on board a sport fishing boat at the age of 19, it was a big deal. The owner of the boat, my boss, was into big-game fishing and, at the time, had the nicest boat in the marina. Also known as offshore sportfishing, big-game fishing involves catching billfish, bigger tunas, and large fish alike.

After fishing together for around 8 months, we began preparing for one of the biggest fishing events in the world, the Mid-Atlantic $500,000 Sportfishing Tournament. Laying down the groundwork for a successful tournament meant hiring an experienced boat captain. So, that’s what we did.

Our complete crew went on to work some pretty uneventful pre-fish days. A couple of days before the tournament, the conversation turned toward blue marlin fishing. It’s worth noting that, at this time, I had only ever caught one blue marlin in my life. Naturally, I had concerns about being too green to carry out the job, should one bite.

I received a resounding: “You’re going to do just fine”.

It just so happens to be the following day when we’re out trolling that we saw a blue marlin. A huge one at that, at least twice my size. We had a squid that was rigged and skipping down the middle of our spread when we all spotted it. The blue marlin swam straight up behind the squid and started batting at it with its bill, and before we knew it, the fight was on.

Its head and shoulders were clearly out of the water when it latched onto the squid, and the line came out of the release clip. I’m yelling at my boss to get in the fighting chair. It’s now between us and this colossal fish. 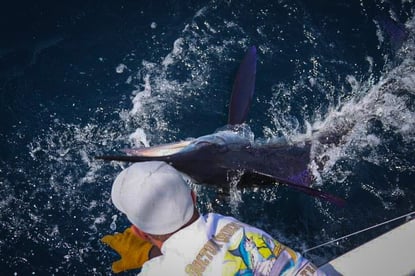 We’re 20 minutes into the fight and waist-deep in water (that had flooded onto the deck) when the fish neared close to the boat. Our boat captain turns to me and tells me to take a wrap. The last thing I heard him say was: “If you’re going to take a wrap, you don’t let go”.

There’s black smoke coming from the diesel engines of the boat. A strong representation of the effort I was putting into reeling this blue marlin, who was full of life and never seemed to tire. Finally, we get it close enough and we’re able to make the release. My boss snapped a quick picture, and the fish dashed away while the crew celebrated. My hands were clamped shut for over 30 minutes. I’ll never forget it!

I'm not sure the crew actually expected me to hold on so long. "That kid's crazy", is a phrase I heard often that day. I owe a lot of how I’m able to fish today to what I learned back then as a mate. I enjoy being thrown into the deep end. It’s sometimes the way that you learn the quickest, right?

This experience is just one example of the insight I have into what our fishing clients are trying to achieve. There's something about being able to watch a fish come into the spread, and before you even yell it out to your crew, you're already thinking the catch through. I get that feeling and sharing that knowledge with others has become second nature. It's pretty awesome.

After that momentous day, I continued to fish in tournaments, hone my skills, and in 2008, decided that I’d get out of the cockpit and start running the boats. I received my captain's license and traveled up and down the East Coast for seasonal fishing.

I'm now able to make a difference in helping others score their big catch - because I've been there. At Network Innovations, our leisure maritime solutions are customized to help sport fishermen, sailors, yacht crews, holidaymakers, and more stay connected at sea so they can focus on their craft. Their passion is our passion, and I sure love hearing about our client's past and present experiences on the water.